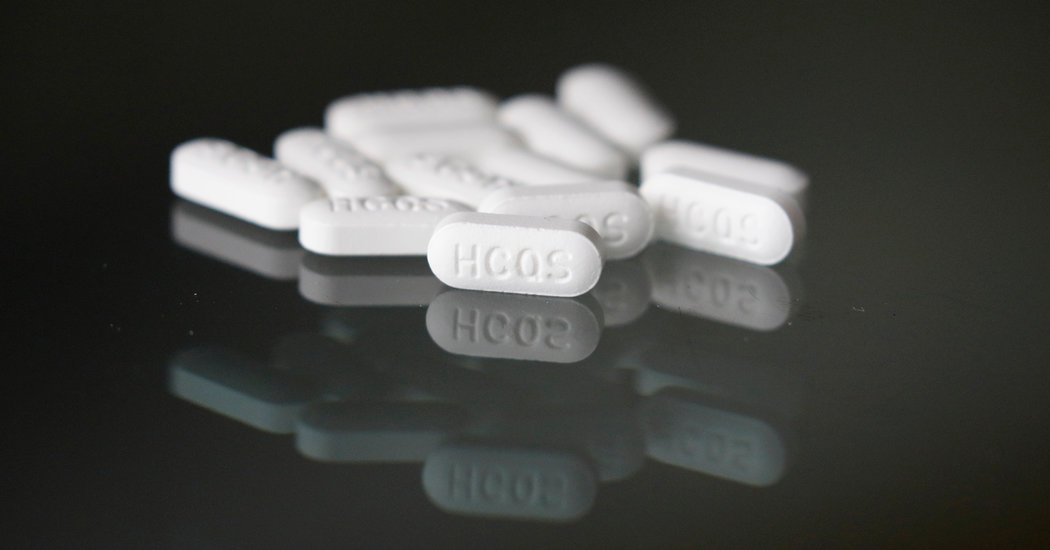 The reports, published in two leading journals, were retracted after authors could not verify an enormous database of medical records.

Two prominent studies on the drugs chloroquine and hydroxychloroquine that used the same dataset from a company called Surgisphere were retracted on Thursday.Credit…John Locher/Associated Press

The studies, published in renowned scientific journals, produced astounding results and altered the course of research into the coronavirus pandemic.

One undercut President Trump’s claim that certain antimalarial drugs cure Covid-19, the illness caused by the virus, concluding that the medications in fact were dangerous to patients. The other found that some blood pressure drugs did not increase the risk of Covid-19 and might even be protective.

Both studies were led by a professor at Harvard, and both depended on a huge international database of patient medical records that few experts had ever heard of.

But on Thursday, the studies were retracted by the scientific journals in which they had appeared, The New England Journal of Medicine and The Lancet, because the authors could not verify the data on which the results depended.

The retractions may breathe new life into the antimalarial drugs hydroxychloroquine and chloroquine, relentlessly promoted by Mr. Trump as a remedy for Covid-19 despite a lack of evidence. On Wednesday, after the journals noted concerns about the studies, the World Health Organization announced that it would resume trials of the medications.

But the retractions also raise troubling questions about the state of scientific research as the pandemic spreads. Thousands of papers are being rushed to online sites and journals with little or no peer review, and critics fear long-held standards of even the most discerning journals are eroding as they face pressure to rapidly vet and disseminate new scientific reports.

“It is now clear to me that in my hope to contribute to this research during a time of great need, I did not do enough to ensure that the data source was appropriate for this use,” Dr. Mandeep Mehra, lead author of the two studies, said in a statement to The New York Times.

“For that, and for all the disruptions — both directly and indirectly — I am truly sorry.”

The paper about chloroquine and hydroxychloroquine appeared in late May in The Lancet. Though there had been other hints of side effects associated with the drugs, clinical trials were halted worldwide while alarmed investigators began safety reviews.

But questions arose almost immediately about irregularities in the data and the provenance of the data set used in the analysis as well as in Dr. Mehra’s earlier heart study, which had appeared in The New England Journal of Medicine.

The data came from a company called Surgisphere, which claims to have granular patient-level information shared by 1,200 hospitals and health facilities on six continents. The founder and chief executive, Dr. Sapan Desai, was listed as an author on both papers.

Dr. Mehra, who is the medical director of the Brigham and Women’s Hospital Heart and Vascular Center in Boston and has authored hundreds of publications, said in a statement that he became involved in the project because he felt a need to contribute to science during the pandemic.

Dr. Mehra said he was introduced to Dr. Desai through one of the co-authors, whom he did not identify, and was told about the existence of a mammoth private database of patient medical records compiled by Surgisphere. Dr. Mehra said he hoped the data could be used in rapid studies that improved outcomes of patients with Covid-19.

Dr. Desai furnished the statistics used in both the heart and hydroxychloroquine studies. Critics were quick to point out anomalies in both pieces of research, including implausible findings that should have been detected during the peer review process — like the registry’s apparent inclusion of a large number of Covid-19 cases very early on in the pandemic, even in Africa, where few hospitals have electronic health records.

Many researchers were astonished to find out that such a database could exist, or that the gathering and analysis of tens of thousands of medical records on multiple continents could have been carried out so quickly.

In an interview earlier this week, Dr. Desai vigorously defended the Surgisphere database, saying that he was “all for transparency” but was bound to secrecy by contractual agreements with the hundreds of hospitals that are his clients, and therefore could not show anyone the raw data from his registry.

“We did this because there was an opportunity to help,” Dr. Desai said. “We’re not making any money from this, we’re doing it at our own expense. This is why I went into medicine.”

Dr. Desai declined a request from The Times to be put in contact with a hospital or health care facility that provided its data to Surgisphere. He did not respond to inquiries after the retractions.

Image A screen shot from Surgisphere’s website, which advertised a response to criticism of its paper in The Lancet.

The controversy has brought close scrutiny to a small, little-known company, which Dr. Desai says has fewer than a dozen employees yet has amassed an enormous private registry containing detailed medical information from patients around the globe.

Dr. Desai has used the Surgisphere name in various ventures over the years, but until February, he worked as a vascular surgeon at Northwest Community Hospital in Arlington Heights, Ill.

He left the job because his wife was having a baby, and because business at Surgisphere was picking up, a spokeswoman said.

On its website, Surgisphere lists its office as the 31st floor of the iconic John Hancock building on Michigan Avenue in downtown Chicago — a co-working space that Dr. Desai confirmed is the company’s corporate office.

It is possible for a company to build an enormous database of patient medical records, said Dr. Harlan Krumholz, a cardiologist and health care researcher at Yale University and Yale New Haven Hospital.

The ubiquity of “big data” can be tempting for researchers, he added, but they still must understand where the data came from, its authenticity and its quality.

It is not implausible that a large database could accrue records from a large number of hospitals without their knowing, he said — indeed, it is frequent. Hospital systems contract with vendors who then pass records along to other companies, including those compiling big data for health care marketing and research.

Nonetheless, Dr. Krumholz said, a database like the one promoted by Surgisphere should have raised some eyebrows.

“If this database is this good, why haven’t we been using it?” he said.