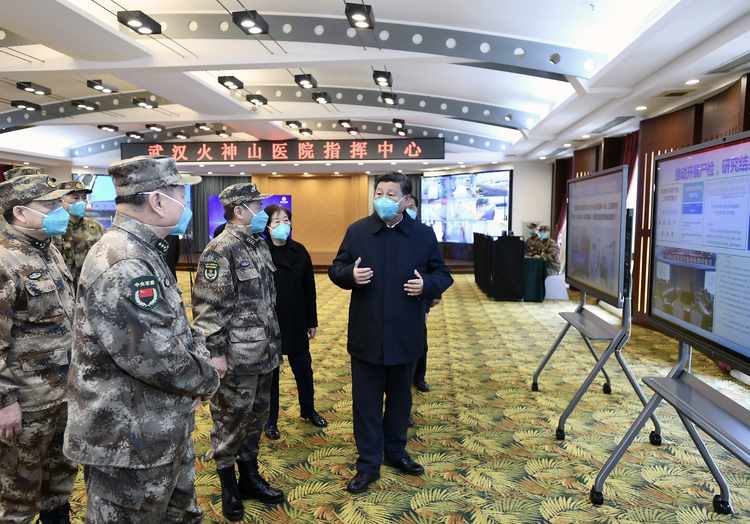 While the world fights the coronavirus pandemic, China is fighting a propaganda war. Beijing’s war aim is simple: shift away from China all blame for the outbreak, the botched initial response, and its early spread into the broader world. At stake is China’s global reputation, as well as the potential of a fundamental shift away from China for trade and manufacturing. Also at risk is the personal legacy of General Secretary Xi Jinping, who has staked his legitimacy on his technocratic competence. After dealing with the first great global crisis of the 21st century, the world must fundamentally rethink its dependence on China.

After months of staying holed up in the Forbidden City, Mr. Xi finally ventured to Wuhan, the epicenter of the virus, to declare victory over the virus as all the makeshift hospitals have been closed. Yet no one knows if Beijing’s claims that new indigenous cases are slowing down are true or not, given long-standing doubt about the veracity of any official Chinese statistics, and the party’s failure to act in the early days of the coronavirus.

The communist government instead is claiming that it has largely controlled the epidemic, even as it suspiciously now blames “foreign arrivals” for new cases of virus. Leaked video from China shows huge lines at a hospital in Chongqing, for example, raising questions about just what is happening around the country.

What Beijing cares about is clear from its sustained war on global public opinion. Chinese propaganda mouthpieces have launched a broad array of attacks against the facts, attempting to create a new narrative about China’s historic victory over the Wuhan virus. Chinese state media is praising the government’s “effective, responsible governance,” but the truth is that Beijing is culpable for the spread of the pathogen around China and the world. Chinese officials knew about the new virus back in December, and did nothing to warn their citizens or impose measures to curb it early on.

Instead of acting with necessary speed and transparency, the party-state looked to its own reputation and legitimacy. It threatened whistleblowers like the late Dr. Li Wenliang, and clamped down on social media to prevent both information about the virus and criticism of the Communist Party and government from spreading.

Unsurprisingly, China also has enablers abroad helping to whitewash Beijing’s culpability. World Health Organization Director-General Tedros Adhanom Ghebreyesus refused for months to declare a pandemic, and instead thanked China for “making us safer,” a comment straight out of an Orwell novel. This is the same WHO that has refused to allow Taiwan membership, due undoubtedly to Beijing’s influence over the WHO’s purse strings.

Most egregiously, some Chinese government officials have gone so far as to claim that the Wuhan virus was not indigenous to China at all, while others, like Mr. Tedros, suggest that China’s response somehow bought the world “time” to deal with the crisis. That such lines are being repeated by global officials and talking heads shows how effectively China’s propaganda machine is shaping the global narrative. The world is quickly coming to praise the Communist Party’s governance model, instead of condemn it.

The reality is that China did not tell its own people about the risk for weeks and refused to let in major foreign epidemiological teams, including from the U.S. Centers for Disease Control. Thus, the world could not get accurate information and laboratory samples early on. By then, it was too late to stop the virus from spreading, and other world capitals were as lax in imposing meaningful travel bans and quarantines as was Beijing.

Because of China’s initial failures, governments around the world, including democratic ones, now are being forced to take extraordinary actions that mimic to one degree or another Beijing’s authoritarian tendencies, thus remaking the world more in China’s image. Not least of the changes will be in more intrusive digital surveillance of citizens, so as to be able to better track and stop the spread of future epidemics, a step that might not have been necessary if Beijing was more open about the virus back in December and if the WHO had fulfilled its responsibilities earlier.

The Stakes for China and Globalization

Regardless of how much some governments and global voices praise China, Xi and the Communist Party care about dominating the propaganda war because the Wuhan virus has stood their nation on a razor’s edge. Xi’s own legitimacy is not merely at stake. His government is ferociously fighting to divert blame and attention, fearing that the world rightfully may utterly reassess modern China, from its technocratic prowess to its safety. Decades of a carefully curated global image may crumble if nations around the globe start paying attention to China’s lax public health care, incompetent and intrusive government, and generally less developed domestic conditions.

Xi’s fears are well founded, as a global reconsideration of China is long overdue. Legitimate criticisms and doubts about China’s governance and growth model were long suppressed by Chinese pressure and the willingness of many to buy into the Communist Party’s public line. Public shaming of foreign corporations, global influence operations, and “elite capture” — all are policies Beijing has deployed to maintain China’s public image.

That carefully tended image is now cracked. Those concerned with global health issues may wonder why it is that China is wracked regularly by viral epidemics in addition to coronavirus, such as SARS, African Swine Fever, and avian flu (another outbreak is happening right now). Others may begin to look more carefully at China’s environmental devastation and the hundreds of thousands of premature deaths each year from air and water pollution.

On the trade side, many foreign corporations already have been reconsidering their operations in China, due to rampant intellectual property theft and rising production costs; now, they may seriously question how safe it is to continue to do business in China. Not only is the health of their employees at risk, but they no longer can be assured that China will be a stable supplier. If coronavirus becomes a seasonal phenomenon, as some experts predict, then even with a vaccine, new strains of the pathogen will always raise the specter of another out-of-control epidemic overwhelming the party-state’s capabilities and infecting the rest of the world.

More broadly, the pandemic of 2020 has brought doubts about globalization into the mainstream. Decades of open borders, unceasing intercontinental travel, study abroad, just-in-time inventory systems, and the like have created unexpected vulnerabilities in populations and economies thanks to unfettered openness. To worry about such weaknesses is not to adopt a Luddite reactionary stance, but to try and salvage the bases of the post-World War II global economic architecture.

Those who assumed that global markets were the optimal economic model and would always work, now have to consider whether globalization is the best system for dealing with pandemics like coronavirus, let alone old-fashioned state power plays like China imposed on Japan back in 2010, when it blocked the export of rare-earth minerals over territorial disputes in the East China Sea. Perhaps the biggest long-term economic effect of coronavirus will be on long-standing assumptions about global supply chains.

Because of the way the global economy has developed since 1980, to question globalization today is in large part to question the world’s relationship to China. As Sens. Marco Rubio and Tom Cotton have pointed out, America and the world have a prudential responsibility to reconsider their dependence on China.

It is only since the outbreak of the pandemic that Americans have come to learn that China is the major supplier for U.S. medicines. The first drug shortages, due to dependence on China, have already occurred. Eighty percent of America’s “active pharmaceutical ingredients” comes from abroad, primarily from China (and India); 45% of the penicillin used in the country is Chinese-made; as is nearly 100% of the ibuprofen. Rosemary Gibson, author of “China Rx,” testified last year to the U.S.-China Economic and Security Review Commission about this critical dependence, but nothing has changed in this most vital of supply chains.

The medicine story is repeated throughout the U.S. economy and the world. The unparalleled economic growth of China over the past generation has hollowed out domestic industries around the globe and also prevented other nations, such as Vietnam, from moving up the value-added chain. Many industries are quite frankly stuck with Chinese companies as their only or primary suppliers. Thus, the costs of finding producers other than China, what is known as “decoupling,” are exorbitant, and few countries currently can replicate China’s infrastructure and workforce.

Rethinking the Chinese Model and Globalization

The world never should have been put at risk by the coronavirus. Equally, it never should have let itself become so economically dependent on China. The uniqueness of the coronavirus epidemic is to bring the two seemingly separate issues together. That is why Beijing is desperate to evade blame, not merely for its initial incompetence, but because the costs of the system it has built since 1980 are now coming into long-delayed focus. Coronavirus is a diabolus ex machina that threatens the bases of China’s modern interaction with foreign nations, from tourism to trade, and from cultural exchange to scientific collaboration.

Xi can best avoid this fate by adopting the very transparency that he and the party have assiduously avoided. Yet openness is a mortal threat to the continued rule of the CCP. The virus thus exposes the CCP’s mortal paradox, one which shows the paralysis at the heart of modern China. For this reason alone, the world’s dependence on China should be responsibly reduced.

To begin with, Washington must mandate that some significant percentage of major drugs, everyday medicines, first-aid material such as masks and gowns, and higher-end medical equipment like ventilators, will be produced domestically, so that we are better prepared for the next pandemic. In addition, controlling our own supply of vital medicines and equipment will allow Washington to continue to be able to assist other countries during similar emergencies, something we are not able to do with coronavirus and which Beijing is stepping in to take advantage of.

Second, America’s broader economic dependence on China needs to be reduced. Materials such as rare earths, 80% of which come from China, should be produced at home when possible, while the U.S. military needs to limit its exposure to Chinese goods for everything from transistors to tire rubber.

Thirdly, Washington must ensure that China does not capture the global semiconductor chip-making industry, which is a priority for Beijing. To surrender the crown jewel of the digital economy would put America in a position of permanent dependence vis-à-vis China.

The coronavirus pandemic is a turning point for China and the world. Today, Washington and other global capitals are solely responsible for the success or failure of their own efforts to control the Wuhan virus. In the short term, however, they should not let Mr. Xi and China get away with rewriting the history of the epidemic. In the longer run, they must look to reform globalization by prudently reshaping their economies and societies in the shadow of future crises.

Michael Auslin is a fellow at the Hoover Institution, Stanford University, and the author of “Asia’s New Geopolitics.”